Have you ever had a photo album that you wanted to create, but couldn’t find the “perfect” album to use?  OR, the “perfect” album is ridiculously priced?  I have experienced both of these situations and decided to take matters into my own hands.  I purchase basic, inexpensive albums and have used maps, house plans, and photos to cover an existing album, and make it “one of a kind”. 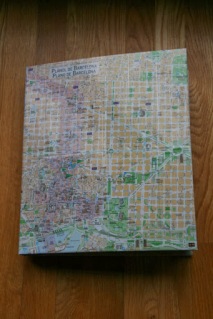 When my husband & I travelled to Barcelona Spain, I saved a map of the city and used it as my album cover.

I wrapped it around the entire album.

Once the map was placed where I wanted it, I taped it on the inside covers.  Then I covered the entire outside with strips of packaging tape, placed horizontally, and slightly overlapping.

This was an extra set of blue prints from construction at our house.

Again, I wrapped it around the entire outside of the album and taped it in place.

I even used the blue prints on the inside cover… 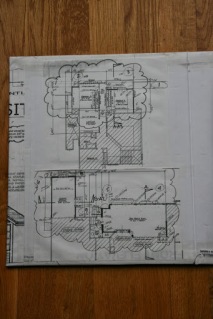 The aerial pictures on the bottom were taken during our hot air balloon ride.  I simply taped them to the album cover.  I used sky blue paper and cut out white clouds.  Very simple! 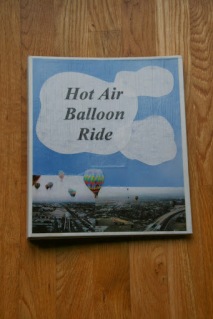 So you see, you can easily and inexpensively create your own, very personalized photo album for any occasion.
Happy travels…
“Wonder what I will come up with next”…